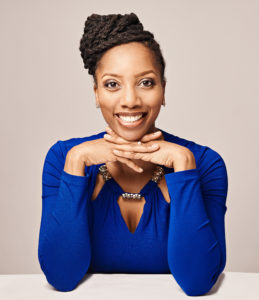 The Reverend K. Monet Rice-Jalloh is an Associate University Chaplain at Wake Forest University in Winston-Salem, NC. She has been serving in this position since July of 2012. She is an ordained minister in the Baptist tradition.

Rev. K is a native of Tuscaloosa, Alabama, and a graduate of Louisiana State University, in Baton Rouge, Louisiana, where she competed on their Women’s Track and Field team and obtained her Bachelors of Arts degree.  She then pursued her Master of Divinity degree from Princeton Theological Seminary in Princeton, NJ, and is currently completing her doctoral degree at Duke Divinity School.

Rice-Jalloh is often sought after for her candid and charismatic approach to addressing topics that are categorized as “taboo.” In her ministerial use of candor, Rice-Jalloh says, “The seat of my theology rest in the notion that God’s original design for humanity was that we be proverbially naked before one another and sensibly unashamed. It is my deep conviction that the original sin was when humanity decided that we should hide from both God and each other. Humanity is in the practice of heaving judgements upon ourselves and projecting them onto others. Fear and shame are the pests that infest the fruit fields wherever the works of justice and communal wholeness are being planted. But if we can un-cover and un-clothe truth, let the nakedness of what is true move boldly, then surely healing can be unclothed too.”

Rice-Jalloh relishes working within Academic Religious Life because her work is rooted in the privileges of pausing – pausing to think, to ponder, to research, to discuss and to engage.

She is married to Mamadou Aliou and together they are raising two children, two birds, and several healthy houseplants.

Those who know her well often affectionately describe her as the most unconventionally conventional person they know. To which she replies, “It looks like God is still calling ‘whosoever will.’” Nevertheless, it is her heart’s cry and prayer that in everything she does that the Lord would simply be pleased.