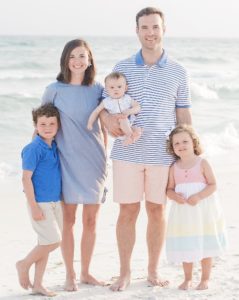 John became the RUF campus minister at Wake Forest University in 2015. Previously he served as an Associate Pastor at City Church of Richmond (PCA) in Richmond, VA.

John is a graduate of Tulane University (BA ’06) and Reformed Theological Seminary (MDiv ’13).

John loves getting excited about new things and then telling everyone about them. When not doing that, he likes reading books, drinking coffee, and Crossfit – but usually not at the same time.

He met his wife, Mary Clarke, in college while serving with FOCUS (Fellowship of Christians in Universities and Schools), a para-church youth ministry for independent school students. Together, they moved to Winston-Salem in May 2015 and live there with their three young children, Leo, Mary Landon, and George.